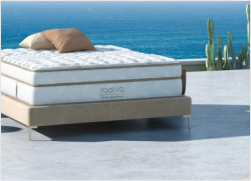 A study published in the International Journal of Scientific Research found that memory foam mattresses were among the least likely to sag in the center, but were still prone to sagging with prolonged use. If your mattress is sagging, your likely only real solution is to replace it. You can try purchasing a latex topper or adding support beneath the mattress, but ultimately, your only true course of action is to replace it.